up to 3x months Debit Card Installment of RM130.00
with 0% interest installments.
×

Shop this Brand
Availability: In Stock! Ready To Ship.

Samson's Q2U combines the convenience of digital and analog audio capture into one dynamic microphone. With XLR and USB outputs, the Q2U is the first choice for home/studio and mobile recording, as well as stage performance. The Q2U is simple to setup and outshines microphones that cost more than twice the price. It comes with a mic clip, desktop tripod stand with extension piece, windscreen, XLR cable and USB cable. A package with everything you need to start recording right out of the box.

Yes! Majority of our product provides a minimum 1 year warranty on the electronic parts.

I had a few reasons why I opted for this dynamic microphone instead of other well-known brands like Blue Yeti/Shure/condenser microphones.

1. Highly recommended model. I was considering other well-known brands but this budget microphone has received such overwhelmingly positive reviews it's hard to ignore and simply put, I'm sold on its performance.
2. Reasonably price for its great specs (USB and XLR!), and even cheaper than other famous go-to brands, it's on a better offer as I'm paying in instalment with Split.
3. I live in a noisy flat to the point where I can hear neighbours walk at the hallways so dynamic microphones being extra silent and selective on the noise it amplifies does me a huge benefit when I moderate online.
3. I used a Boya lavalier before but it wasn't suitable for me as the battery intake needed regular changing and its wires were too long. (it is a lavalier after all)

Overall I have been using this microphone for almost one month and I'm very pleased with my purchase, a fellow friend who does podcasts and online talks regularly also bought the same model from my recommendation. Gaming (and occasional singing) is also better now with a crystal clear voice. Much love and many thanks to MusicBliss for selling this model in KL and giving me the option to budget and pay in instalments! <3

Photos attached is the microphone used with Remax Boom arm for microphone. (sold separately from Samson microphone) but the tripod does me well by supporting my USB hub too lol. 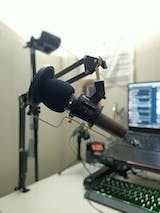 Great entry level mic for podcasting and more. Awesome build and sound quality for the money. Flexibility of using USB and XLR is a plus.