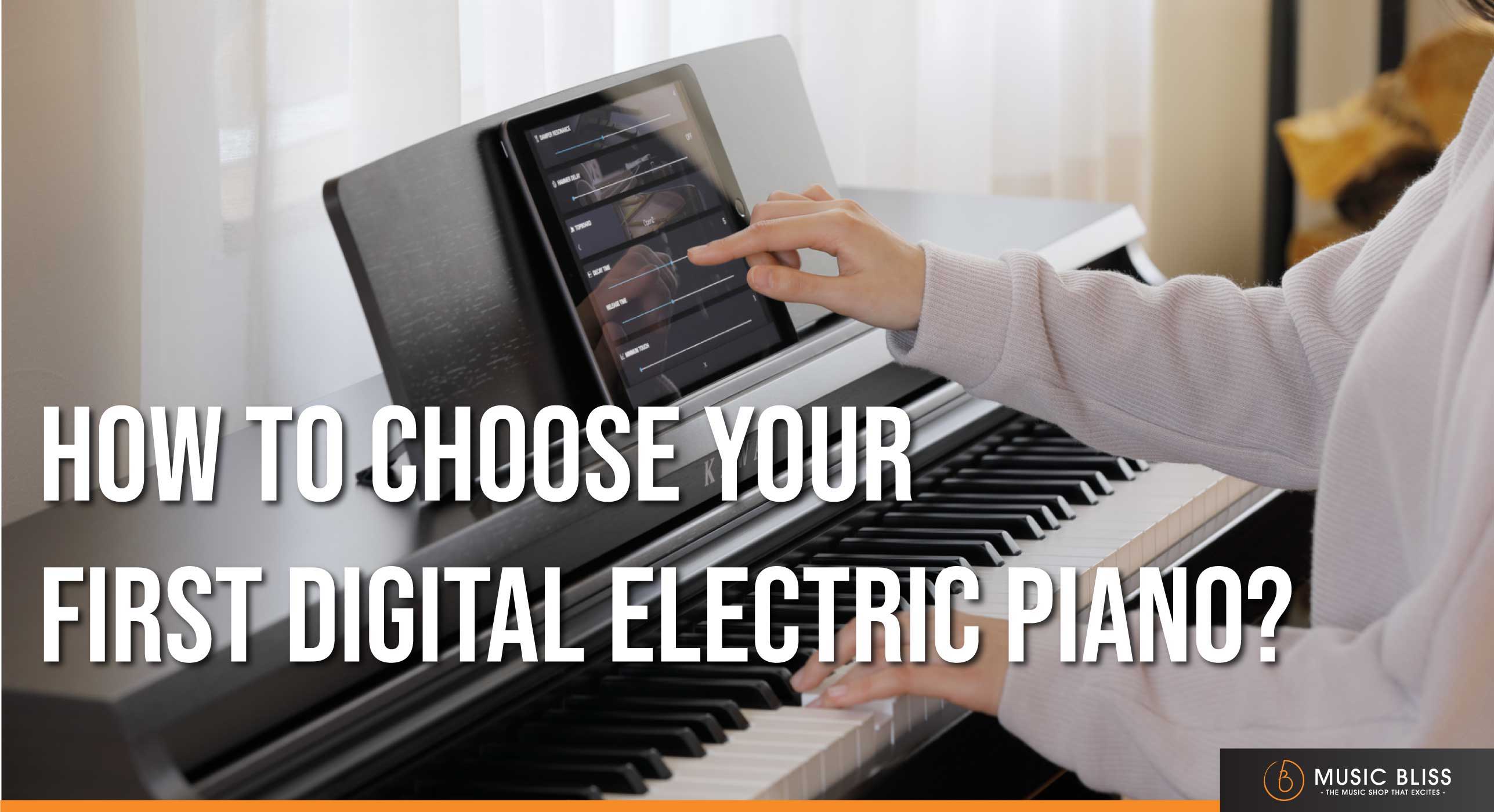 Digital pianos have come a long way in recent years, and their high-quality sound and affordable cost make them a perfect option to acoustic pianos for many players. Finding the proper digital piano for your needs might be difficult at first due to the variety of functions and features available.

If you've decided to purchase a new piano for the goal of learning, this article is for you. This basic tutorial might assist novices in purchasing a digital piano. You will have a good idea of which digital piano would best fit your needs. So, let's get started!

A full size piano or complete set of keys is an 88-note piano (acoustic or digital). Many piano teachers would advocate fully-weighted 88-note pianos since the majority of music examination boards will establish these parameters as the bare minimum for taking their examinations.

Smaller keyboards typically feature 61 or 76 notes, with no weighted keys. When beginning to learn the piano or keyboard, beginners utilise only a few notes at first, but as your kid advances, the variety of notes they play will eventually expand. With fewer keys, your youngster will soon run out of keys to play and will be unable to play music with top or low end notes — simply because the keys aren't there! 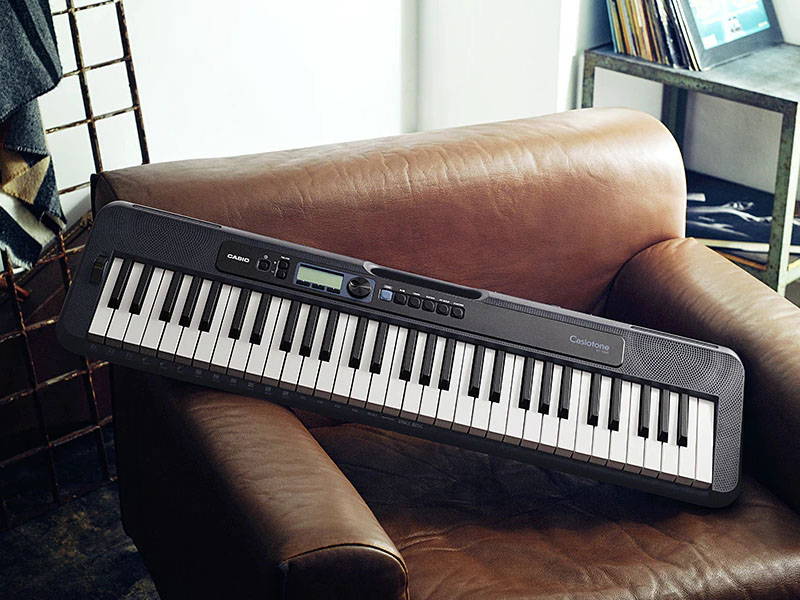 With 61 keys, the Casio Casiotone CT-S200 is designed with flexibility in mind. By day, this keyboard is a 61-key digital piano with piano-style keys. By night, you can take your digital piano into the home studio and use it as a MIDI controller.

The feel of the keys is one of the primary distinctions between pianos and electronic keyboards. The mechanical components of piano keys, such as the wooden hammers that strike the strings within an acoustic piano, cause resistance. If you're coming from a regular acoustic piano, the degree to which a digital piano resembles the motion of a typical acoustic piano makes a major difference in its playability.

Weighted and semi-weighted motions give a more typical piano-like response. Hammer action enhances this responsiveness even more by including genuine mechanical hammers. When played, a little hammer implanted in the key produces a faint "thunk," replicating the reaction of an acoustic piano's keybed.

The best keybeds are commonly referred to be "fully weighted." They will also have graded weighting, such that lower octave keys are heavier, mimicking the heavier hammers and strings found in acoustic pianos. This is commonly known as "graded hammer action." 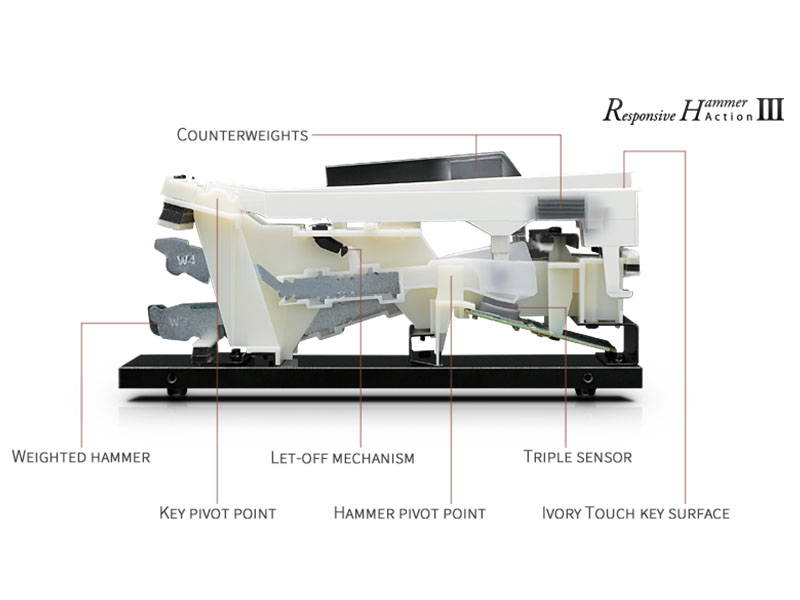 Pay close attention to the sustain and decay of the notes, as well as the overall realism of the sounds, while analysing sound quality. The quality of the amplifiers and speakers utilised in digital pianos is another component that influences the overall sound. 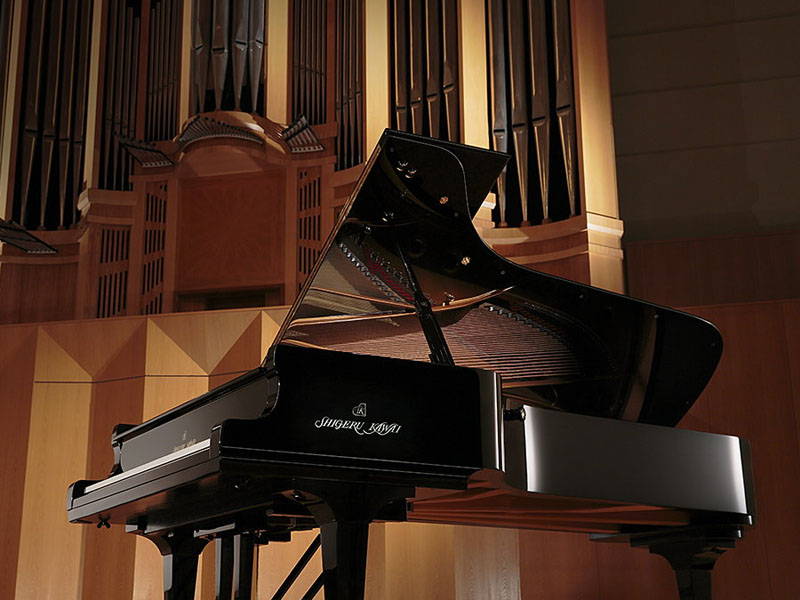 Earning a reputation as the ‘premier pianos of Japan’, Shigeru Kawai instruments grace the stages of concert halls and musical institutions throughout the world, and are prized for their outstanding tonal clarity and exceptional dynamic range. Fun fact ; almost all digital pianos from Kawai has this grand piano sound!

The amount of distinct notes or tones that a piano can produce at once is referred to as its polyphone. You should have at least 32-note polyphony, but 64-note polyphony is preferable for producing intricate sounds. The top grade electronic pianos have polyphony of 128 or 264 notes. 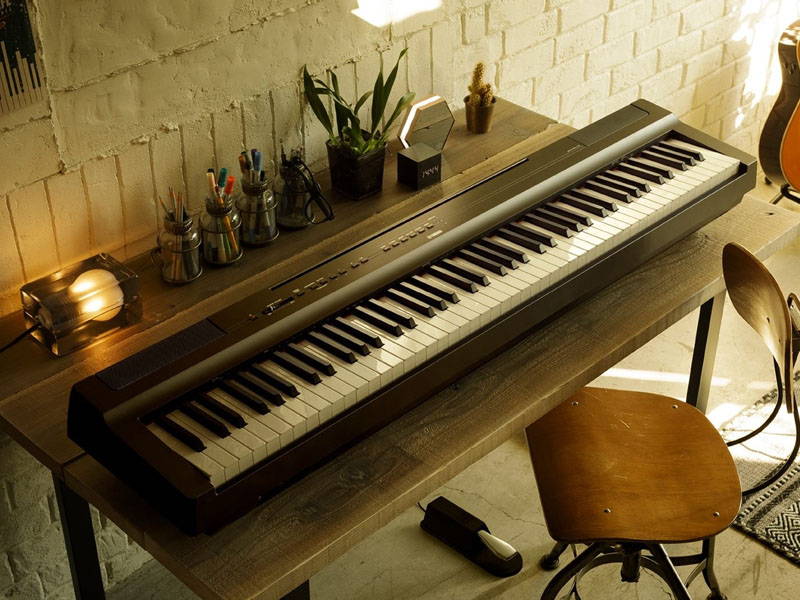 Most digital pianos only have a 128-note polyphony, but the Yamaha P-125 takes this to another level by having a 192-note polyphony cap on their portable pianos. This means you can play up to 192 notes at the same time, which gives you more freedom to add more than the average number of layers when creating your music.

While it may seem like a big deal that today’s pianos often include hundreds of sound samples from instruments like accordions, organs, synthesizers, flutes and so on, once the novelty wears off, you’ll likely find yourself sticking to the more basic piano sounds. Having hundreds of tones and effects to choose from can turn into a distraction. That said, some effects such as judiciously used reverb can help enhance the sound. The ability to play with backing instrumental tracks can also increase the fun factor. 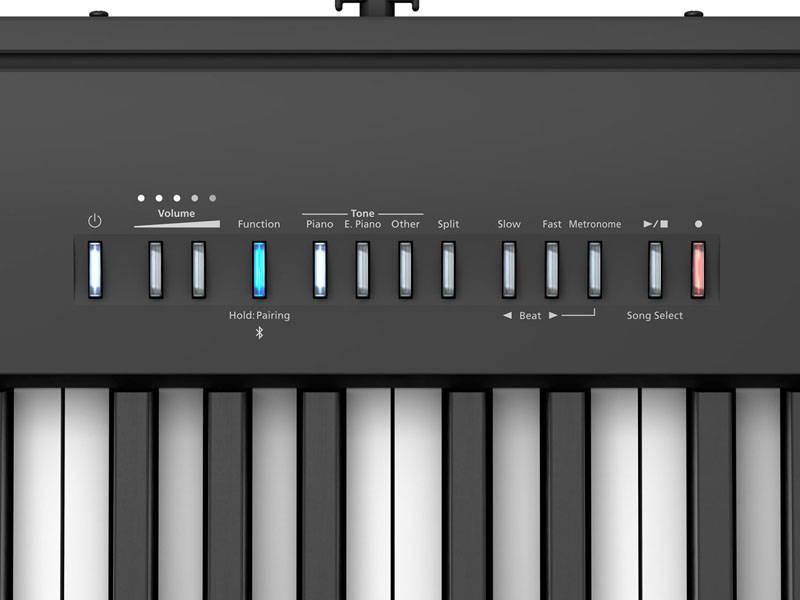 When it comes to sounds, Roland has a long-standing pedigree of being one of the best sound designers on the market. With 12 piano sounds, 20 electric piano sounds and 24 "others" which includes strings, choirs, basses and synths, Roland FP-30X is a value for money digital piano recently released in the market!

Many digital pianos have useful learning features, such as lessons that may take you from a complete novice to a more competent performer. Displays that indicate the chords being played, as well as different lighting schemes that assist novices in picking out melodies and chords, might be beneficial. A built-in metronome can help you improve your rhythm. Some versions allow the keyboard to be divided into pieces, allowing a student and teacher to use the same keyboard while playing in the same octaves. 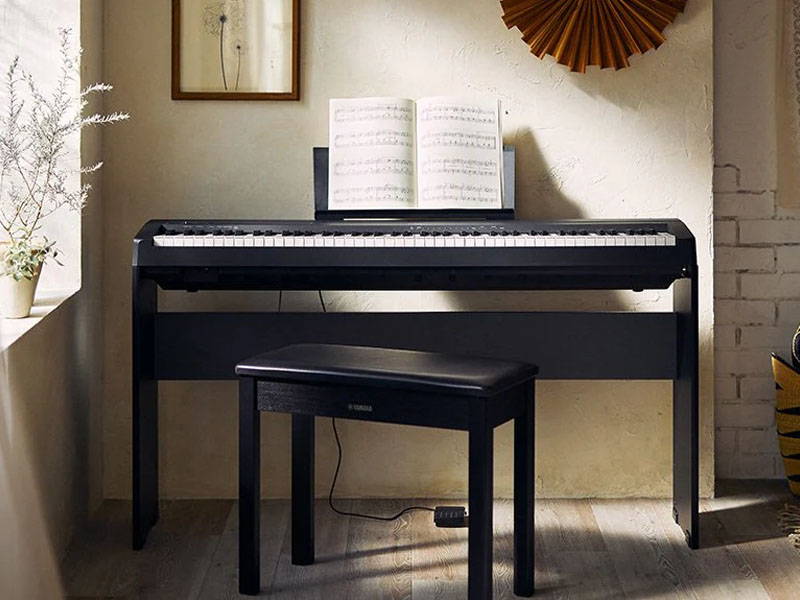 Yamaha P-45 has ten sounds in all, any two of which can be layered together at a time; there’s also a useful learning feature called Duo Mode, which splits the keyboard into two equal zones of acoustic piano, so a teacher and student can sit side-by-side and share instruction and performance as if they were sitting at two adjacent pianos.

In general, if you are searching for a piano for home usage, you should opt for one with a built-in amp and speakers that generate a nice sound with enough loudness. If you want to use a digital piano for live performance or recording in a studio, be sure it has output choices for connecting to PA systems, external amplifiers, or recording consoles.

Other things to consider depending on how you want to use the piano include a headphone jack and a USB port for connecting to a computer. 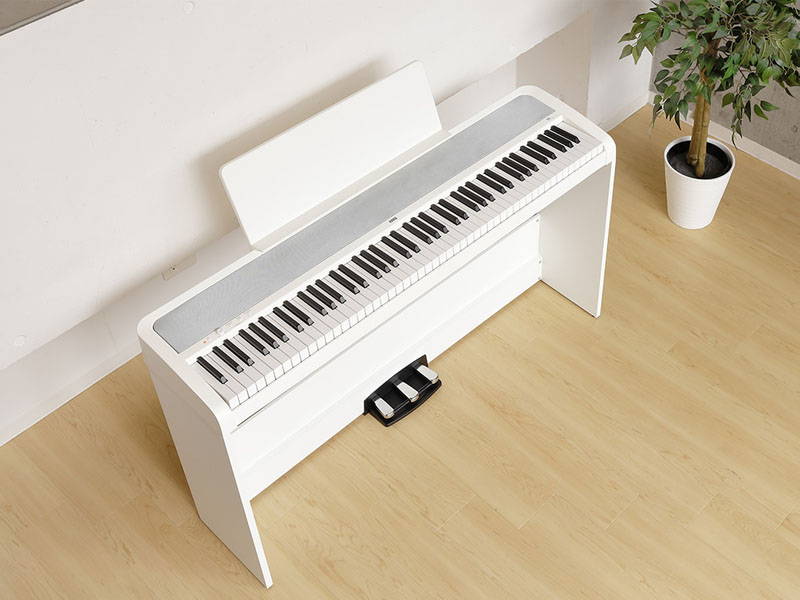 KORG B2 features dual 15w speakers which not only can provide powerful stereo sound when playing, but also a truly emersive piano sound that fits perfectly in every space

It is critical to consider portability. If you need a piano for your house, you may simply get a heavy-weight digital piano given the amount of room you have. However, if you need to travel with the keyboard, get a portable model. The digital piano comes in four different styles: vertical, modern, portable, and stage. Vertical pianos resemble acoustic pianos in appearance, with the speakers housed in the stand's casing.

Contemporary models resemble a conventional keyboard rather than a piano. Portable and stage pianos are easy to transport and may provide a significantly louder sound for players who want to get the most out of them. Each of these kinds has advantages, but it is critical to determine which digital piano style you will desire before investing in any of them. The digital stage pianos are particularly developed for professional artists that want a greater sound and should carry them wherever they play. 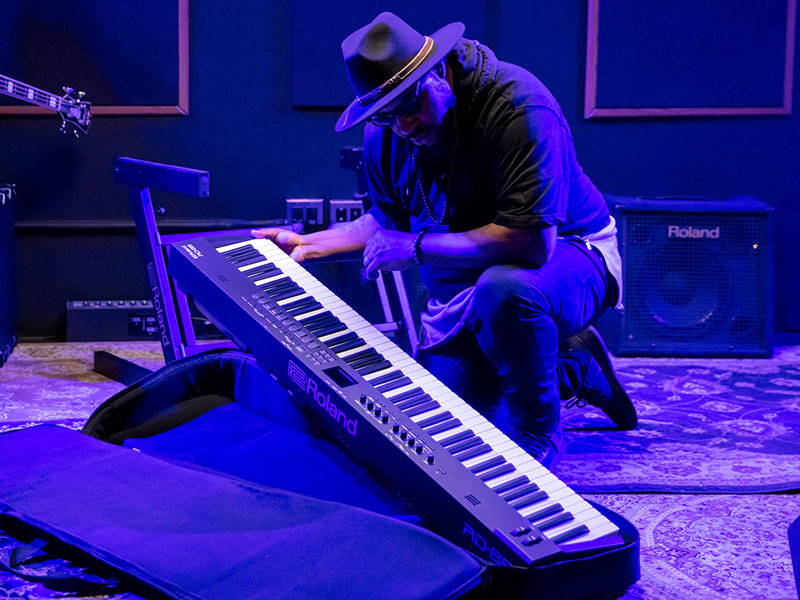 Roland RD-88's clean and compact design fits neatly into your lifestyle. Its lightweight and sturdy build makes it easy to take with you and quick to set up, even on small stages or in cramped rehearsal spaces. And the room-filling integrated speaker system is ultra-convenient and lets you play with less clutter and less fuss.